The Qatar World Cup 2022 is just around the corner. The competition for the most coveted trophy is quite fierce as different top nations are playing in the tournament. One of the favorites to win the World Cup is Germany. The 2014 Champion team will be looking forward to forgot their disastrous campaign at the 2018 World Cup where they surprisingly finished bottom of the group stage. They also delivered an unexpected performance in Euro 2020 where they were eliminated by England in the round of 16. The two successive failed tournaments resulted in change of manager. Hansi Flick replaced Joachim Low as the coach of Germany Football Team. The new coach is looking forward to make an impact at the upcoming World Cup in Qatar. Germany World Cup 2022 Squad is filled with a lot of talented and world class players. Let’s take a look at Germany Starting Line Up for World Cup 2022. 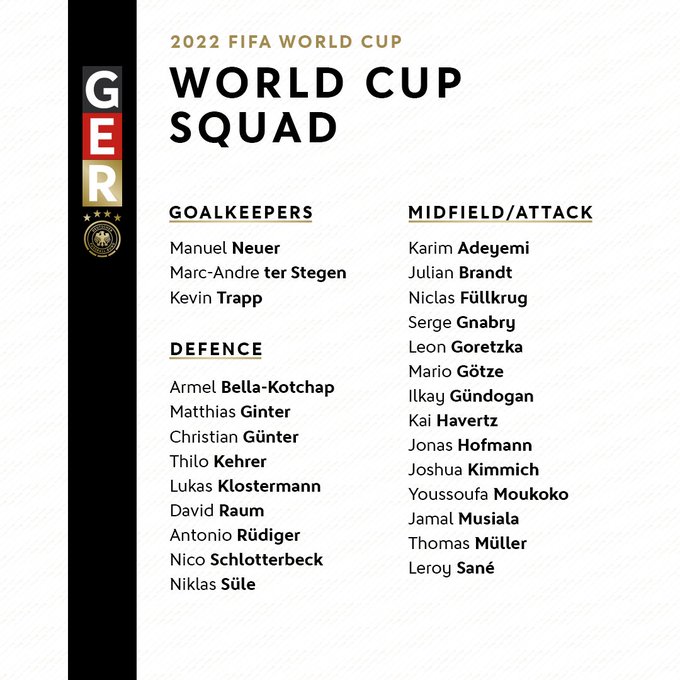 Muller and Hummels were dropped after Germany’s disappointing 2018 World Cup first round exit and a poor Nations League performance later that year. But they were back in the squad for Euro 2020. At that time, it was presumed that they were not anymore in the plans of Germany. But now they are crucial part of team. They are all set to be called up for the current squad.

After the team crashed out of the 2018 World Cup at the group stage, an overhaul was inevitable. Former key players such as Jérôme Boateng, Mats Hummels and Thomas Müller were told that they were surplus to requirements. But now, both Hummels and Muller are back in the team. It will be excited to see how Germany will line up in FIFA World Cup 2022. 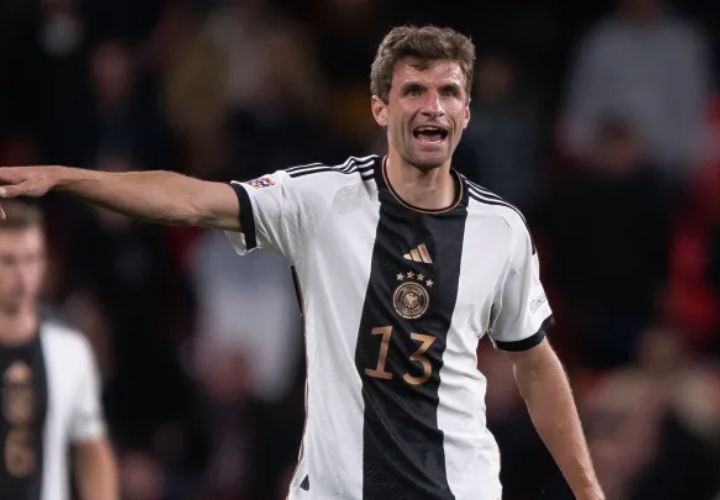 Germany World Cup 2022 squad is underpinned by captain and undisputed No.1 Manuel Neuer, the greatest goalkeeper in the history of the game who shows no sign of slowing down at 36. With the likes of Gündogan, Sane, Havertz and Musiala in the squad, Flick has every chance of bowing out on a high this winter.

How GERMANY could line up in FIFA World Cup 2022

Manuel Neuer : In goal, Manuel Neuer is the obvious option. Despite recently turning 36, Neuer remains first-choice for club and country. The Bayern and Germany captain is the reigning IFFHS World’s Best Goalkeeper, having been awarded the prize for a record fifth time in 2020. He will be a permanent name in Germany Starting Line Up for World Cup 2022.

David Raum : Raum is expected to start as a left back. Let’s see with whom the coach will give a chance to start in Germany Starting Line Up for World Cup 2022. If selected, Raum would be given the permission to stay wide and drag deep-lying opposition defenders out of position.

Antonio Rudiger : There’s every chance that Rüdiger will be Germany’s most senior centre-back in Germany Starting Line Up for World Cup 2022 in Qatar. Rudiger had the confidence to pull off some brilliant forward runs as he does with Real Madrid. The defender has formed part of a compact Real Madrid defence under Ancellotti.

Schlotterbeck : Hummels played at this position for a long time. But now Schlotterbeck is perfect to replace him. His composure in possession and ability to play accurate balls from the back can earn him a spot in Germany Starting 11 of World cup 2022.

Jonas Hofmann : In the recent times, Jonas Hofmann has been a regular player for Germany starting 11 at right-back. It is because of his attacking instincts which are helpful in providing extra width.

Joshua Kimmich : Kimmich has been hailed as being world-class in two positions. At present, he broke on to the scene as a promising defensive midfielder. He’s had plenty of experience in midfield at Bayern Munich this season too. Under Hans-Dieter Flick, Joshua Kimmich returned to midfield and is absolutely acing it in the role of a holding midfielder. He has a vital role to play in Germany World Cup 2022 Squad. 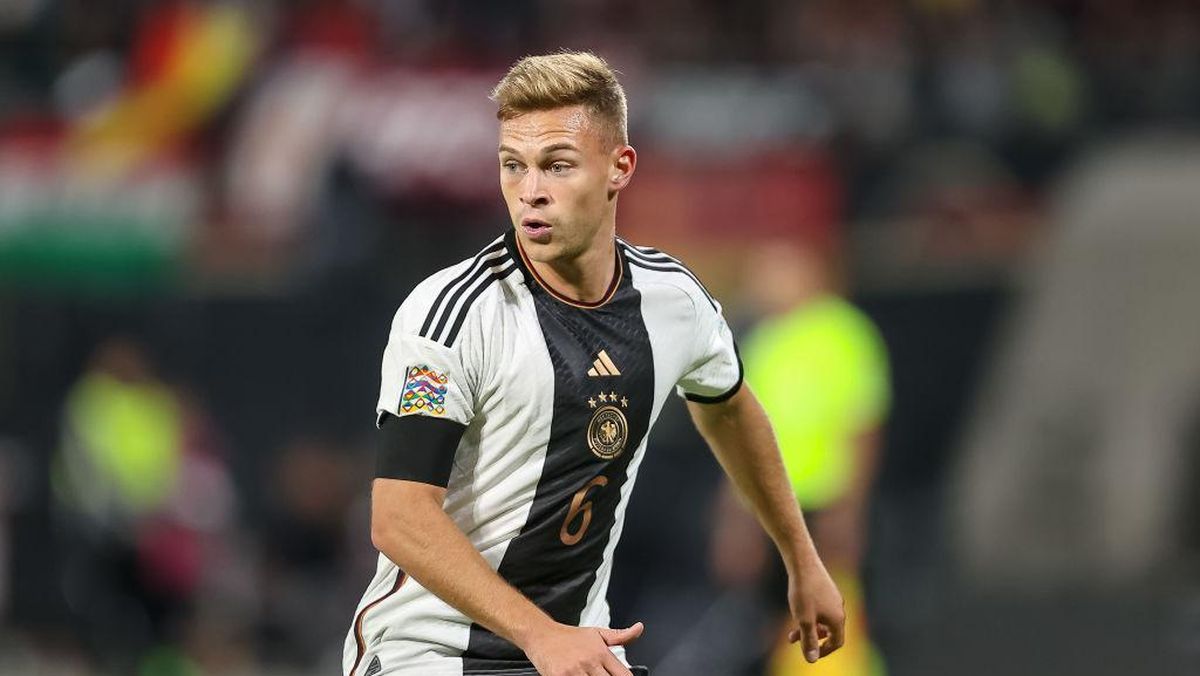 he worst of times, Goretzka’s always been quite a useful player to have in and around the national team. Gundogan might get the nod over Goretzka in Germany starting 11 owing to his superior mobility, as he’s more used to playing in a pressing-oriented system.

Thomas Müller : The veteran German forward help Bayern Munich win its another Bundesliga title this season. Müller may be the most underappreciated player in world football, but his ability to bamboozle remains second to none. His experience brings the creativity that is needed to break down defences, and he just has that added bit of quality that helps him to do so. He has returned to the Germany playing 11 after being sidelined from the team for sometime.

Serge Gnabry : Germany need to wrap Gnabry in cotton wool and bubble wrap to make sure he’s at full strength this summer to join the Germany World Cup 2022 squad. He will definitely lead the attack of Germany Lineup. The incumbent Gnabry has no difficulty playing further forward. He is expected to start as right winger in Germany Starting 11 World Cup 2022.

Leroy Sane : Sané’s going to be one of the most important player in Germany World Cup squad. He can be used on either wing. His finishing still needs improvement, but the all-round quality is undeniable. Sane has impressed with his talent that he showed for Bayern Munich. He easily adjusted himself in Bundesliga after leaving Manchester City.

Kai Havertz : Timo Werner was the first choice to start as the striker in Germany starting 11 at World Cup in Qatar. However, Werner suffered an ankle injury in the win over Shakhtar Donetsk. He has been sidelined for the rest of 2022 and will not be able to go to Qatar. In his presence, Havertz is likely to be the main forward of the team. Kai Havertz is hit some stride as a False 9 at Chelsea, but most of his international outings to date have seen the left-footer line up on the right of midfield or attack.